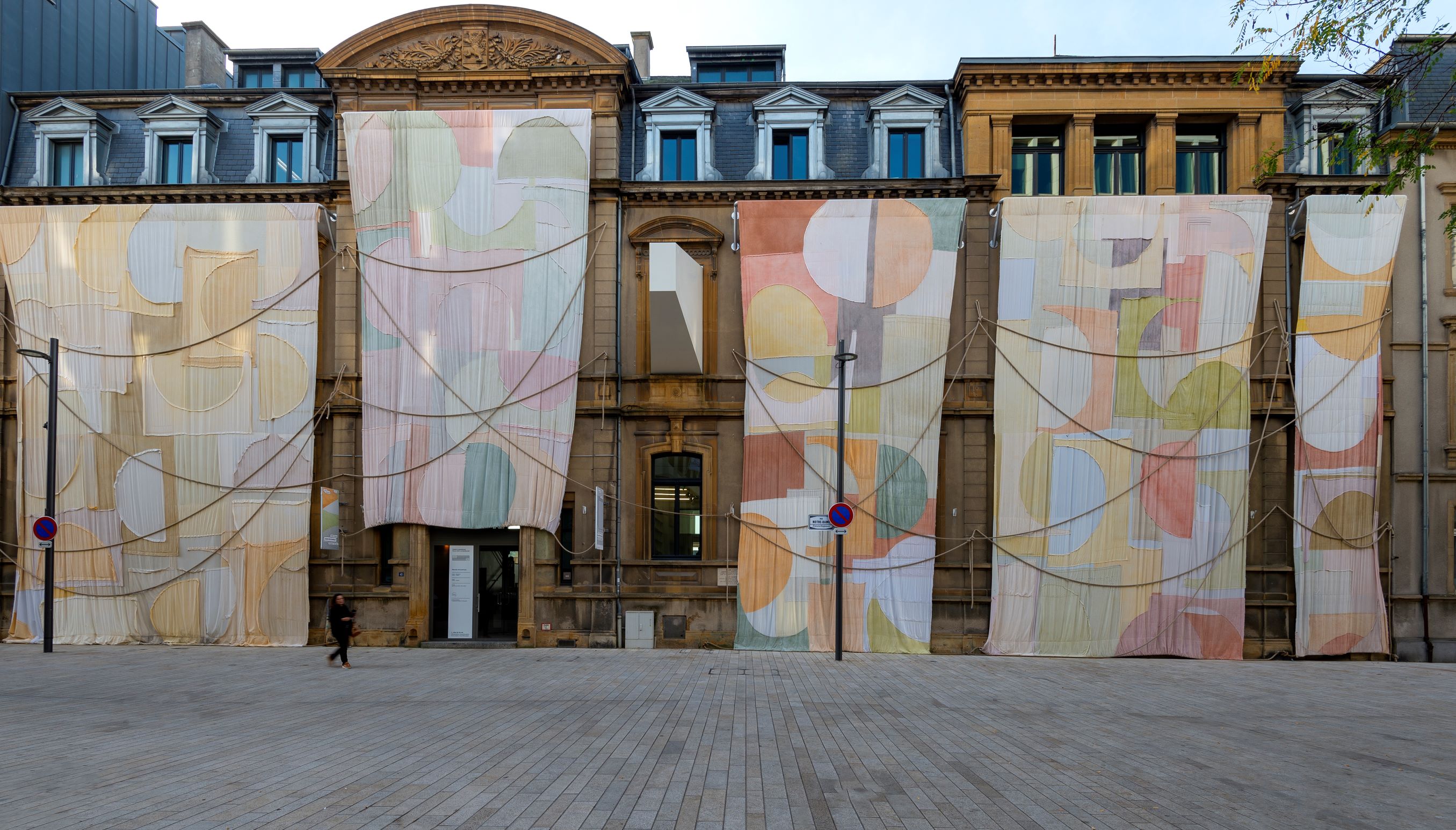 In his Marseille studio, we find pigments, washing machines, jars of colour in which pieces of textile are bathed, rusty steel bars and hanging canvases, waiting to be assembled with others, after cutting and sewing. Thought and composed like paintings, they are then hung in spaces where they act with their environment. In the middle of nature, where they are impregnated by the elements and the weather; indoors, where these canvases and their layout respond to the architecture of the place.

Grandeur and vulnerability come together in the work of Adrien Vescovi like two discordant notes that are brought into tune in a deliberately soft, safe, desaturated space. While disproportionate, the scale at which Vescovi conceives his paintings never seems excessive. Working at such a vast scale means working at the scale of nature itself, which also implies wrestling with shortcomings, whether in terms of space or emotions. Vescovi tries to elude or break up the imposed framework of painting and lose himself in a process which, by definition, cannot be completely controlled. Doing so, he not only accounts for chance and ephemeral or primitive manifestations, but rather conjures them. Rust, ochre, mint green, washed-out yellow: his ‘landscape juices’, as he calls them, capture the Mediterranean relief in its most earthy state.

So how can we not also see in the soft and malleable monumentality of these works an attempt to oppose the harshness of urban environments? Covering the entire northern façade of the Casino Luxembourg, a surface of 14 by 38 metres, Vescovi’s suspended paintings are exposed to the wind and the natural elements. The ‘poor’ materials from which they are made helps to smooth the edges, to rest the eyes and sublimate the cracks wherever they appear.

The magic also operates on the first floor, which has been transformed into a ceremonial space occupied by a painting that has been unfolded on the floor like a large tablecloth on grass and which, through the mere choice of horizontality, inverts the relationship between interior and exterior within the exhibition itself.

Adrien Vescovi (born in 1981 and a graduate of the École supérieure d’art de l’agglomération d’Annecy) has been living and working in Marseille since 2017 after a long practice in the mountains of Haute-Savoie. The artist reinvents with contemporary issues the question of the free canvas and of a painting thought at an architectural and natural scale. The importance of the context in which the artist comes to install his works is for him an essential factor of study. Adrien Vescovi composes temporalities, assembles colours worked according to different alchemical processes from air (sun and moon rays), earth (ochres and plants) and fire (cooking, infusions). His way of sewing is a way of painting. Chance is his ally.

His work has been presented in the Netherlands, Belgium, Denmark and Mexico. In 2021, he will participate in the 22nd Pernod Ricard Foundation Prize with the project Bonaventure signed by Lilou Vidal. His work has also had a first solo exhibition at the contemporary art centre Le Grand Café in Saint Nazaire and has been shown at the Pera Museum in Istanbul.